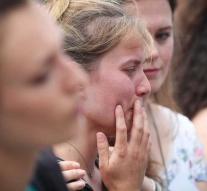 liege - Approximately 3000 people commemorated in Liege the victims of the deadly shooting last Tuesday in the Belgian city.

The participants gathered at the beginning of the afternoon on a square in the center of the city from where they walked the so-called White March to the boulevard d'Avroy, where detainee Benjamin Herman shot three people, including two policemen. Several agents were also injured.

The participants deposited flowers and left hundreds of white balloons.