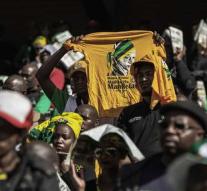 johannesburg - In South Africa, thousands of people gathered to attend the state funeral of Winnie Madikizela-Mandela. The coffin, covered with the national flag, was shown in the football stadium of Soweto, a township in the west of Johannesburg and then a breeding ground for resistance.

Mandela is buried later in the day at Fourways Memorial Park cemetery. There is also her great-granddaughter who died in 2010 at the age of 13 due to a collision. At the stadium in Soweto, the commemoration meeting had already taken place on Wednesday.

The ex-wife of the first black president of South Africa, Nelson Mandela, died last week at the age of 81.