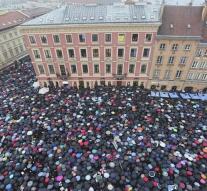 warsaw - Thousands of women have Monday in Poland in the black shrouded argued against a possible ban of abortion.

Estimated that more than 20 000 women gathered in the center of Warsaw, the capital of this ' black protest '. There had also been in a few other cities demonstrations.

The parliament is considering banning abortion initiated by the movement Stop Abortion, which has collected hundreds of thousands of signatures for a total ban on abortion. The law limits legal forms of abortion already to a minimum in the Roman Catholic country, but the citizens' Stop Abortion will totally prohibit the termination of pregnancy.