Home / World / This was the eclipse 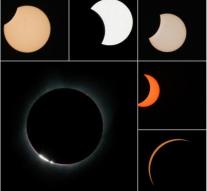 casperamsterdam - 'It was the most beautiful eclipse I've experienced. Both the corona and the diamond ring. '

Science journalist Govert Schilling has raved about the eclipse he Monday the United States saw. He accompanied a traveling companionship of over thirty Dutch, including some amateur astronauts.

In his company was Gert Cazemier, who spent about 40,000 euros in recent years in order to get as much sun eclipses as possible. Enthusiastically, he says: 'It was very beautiful. The sky was clear, it was always awaiting. I have taken nice pictures so I'm very satisfied. '

At the eclipse the moon moved between the earth and the sun, causing the middle of the day a few minutes to darken. Only the radius of the sun was still visible. See all back in our liveblog (mobile users can click through).

In the Netherlands, the next complete solar eclipse will be seen in 2135. The latter was in 1715.