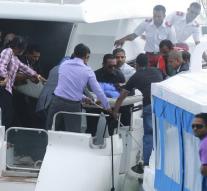 male - The government of the Maldives archipelago has declared a state of emergency for thirty days. That happened after the discovery of a quantity of weapons and explosives, according to local media.

The security forces discovered thereby plans to use the weaponry. In two days are mass demonstrations on the archipelago in the Indian Ocean at the program organized by the opposition party, the MDP.

In late September, there was an explosion on the speedboat of the president. The government said the explosion was caused by a bomb. The FBI said later after investigation it was not a bomb. The Vice President of the archipelago, was arrested on suspicion of involvement in the explosion. The president remained in the blast unharmed but two others were injured.