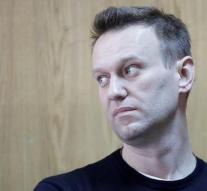 moscow - Russian opposition leader Aleksej Navalny has to enter the cell for thirty days. The judge condemned the pronounced opponent of President Vladimir Putin to imprisonment because he considered him guilty of repeated violation of the law on organizing public gatherings. That has been announced by Navalny spokesman, Kira Jarmisj, via Twitter on Monday evening.

Navalny was arrested at his house in Moscow on Monday when he went to the announced demonstration against corruption. In many Russian cities protesters went up to protest. Hundreds of campaigners were arrested.