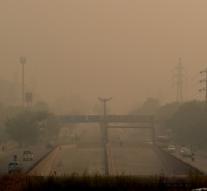 - The Indian capital New Delhi on Monday in a thick layer of smog shrouded, a day after the celebration of the Hindu festival of lights, Diwali. Due to the huge amount of fireworks that was chipped is almost ten times more particulate matter than is considered safe in the air, the BBC writes.

Twitter sharing lots of pictures of air pollution. The concentration of PM10- particulate matter less than 10 microns in diameter- increased to 999 per cubic meter. A level above the hundred is considered unsafe.

The Indian authorities warned Sunday though that the celebration of Diwali could cause problems, partly because of the humidity. In the run up to the holiday people were called back into fireworks, but it seems few people to have attracted something.