Home / World / 'They just do not say anything' 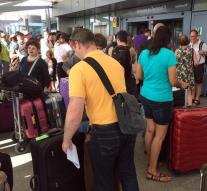 london - Travelers who are stranded at British Airways at the airport at Heathrow airport are not adequately helped by the airline.

'We have to figure it out. Everyone is creaky and angry and the staff just do not say anything, 'says Mike van den Bos from Diessen. He wanted to fly through Kuala Lumpur to Goa (India), but feared he was 'losing' two days of his holiday.

'Via London and Kuala Lumpur to Goa is not the fastest route, I know, but it was the cheapest flight. I do not know when the next flight goes to Kuala Lumpur. I just look for a hotel and then call the airline. They only need to rebook me, but it can take two days too, 'says Van den Bos, who is now stranded on Heathrow and stumbles on a wall of unwillingness. 'I'm leaving the airport now, I will not move on. '

That's what he did at the same airport a half year earlier. 'Then I wanted from Helsinki to Amsterdam, via Heathrow. That's a flight within the EU, but then I was on my follow-on flight through a completely idiotic route, passing through passport control several times. That took a lot too long. I have seen that by this kind of actions a couple who had to go to India missed a flight. Those people were just laughed by BA staff. '