Home / World / 'They are waving here with machetes' 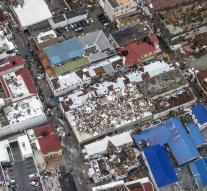 philipsburg - The situation on St. Maarten is becoming increasingly serious. There is anarchy threatening according to eyewitnesses. The robberies increase by the hour. Police are nowhere to be recognized and there is a shortage of soldiers. 'They are waving here with machetes on the street.'

Among other Dutch residents Paul Boetekees and Ebo Keuning, alarms arise. 'It seems that the Dutch government still does not realize the seriousness. We need to get help now and not over days. There is a shortage of everything. The situation is very serious, 'they say.

In particular, the northern French part of Saint Maarten has been wiped away by Irma, estimated to be hundreds of dead and injured. 'The Dutch side looks a bit better, but there are also thousands of homeless people. '

Both men, hoteliers and jurists, respectively, survived the monster canoe by sheltering with fellow hours in a basement and bathroom with mattresses for doors and windows. When they came outside again, they said to themselves, an apocalyptic hell.