Home / World / These are the victims of Dallas 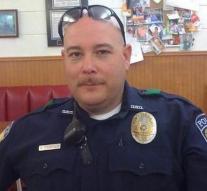 dallas - When the shooting came five agents after a peaceful protest against police brutality in Dallas. This we know about the victims.

Four of the dead were officers of the police of the city of Dallas. The fifth death was working as an agent for the Dallas Area Rapid Transit Force (DART), the public transport company of Dallas.

Only the DART-agent has been identified so far. It's about the 43-year-old Brent Thompson, who worked as an agent since 2009.