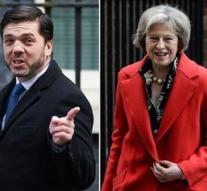 london - Theresa May has won the first round of the election to the Conservatives for the succession of Prime Minister David Cameron. The former defense minister Liam Fox was only sixteen votes the first elimination.

May, the current Minister of Interior, received 165 votes. The Minister for Climate and Energy, Andrea Leadsom, managed to gather 66 votes. Michael Grove was third with 48 votes. Stephen Crabb, the Minister for Work and Pensions, won 34 votes.

The votes are cast by the 330 MPs of the party. The second round is Thursday. May has previously been considered the leading contender to succeed Cameron as leader of the party and prime minister.