Home / World / There is no male or female brains 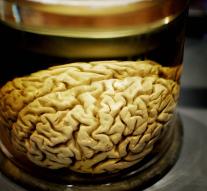 - Many scientists have long believed that the brains of men and women were different. A group of international scientists has identified headed by psycho biologist Daphna Joel university in Tel Aviv that this statement is incorrect. The researchers' findings can be read in a publication of the US National Academy of Sciences.

The researchers looked at, inter alia, 1400 MRI images of brains of both men and women. They looked at the brains as a whole, without specific individual characteristics such as size and differences to be designated in color. Only a very limited number of the studied brain contained parts that were specifically male or female. By far the largest part was a mixture of characteristics.

The brain viewers believe that the tendency of scientists to always divide everything into feminine and masculine probably incorrect. Scientifically speaking, just about anybody else.