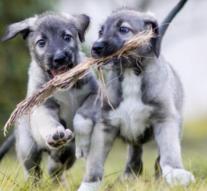 - Finally there is concrete evidence: even dogs can get identical twins. Veterinarian Kurt Cramer discovered the first official monozygotic tweelingpup when he performed a caesarean section at an Irish wolfhound in Mogale City, South Africa.

Kurt was the Caesarean section a routine job, he has been working for 26 years as a veterinarian and carries some 900 a year. In this particular operation, however, he noticed something strange: the umbilical cords of two of the seven puppies were stuck on the same placenta. Kurt guessed immediately that it was identical twins were given the puppies of the same sex and strongly resembled each other.