Home / World / The Times is against 'Brexit ' 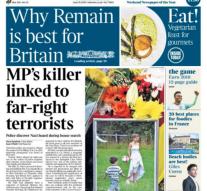 london - The British newspaper The Times advises his readers to vote against a departure from the European Union in the referendum on Thursday. The endorsement of the conservative daily for 'Remain camp is remarkable because the tabloid The Sun, another flagship of the media empire of Rupert Murdoch, is precisely express a 'expressed Brexit.

The Times may be a longer advocate EU membership for Britain, the newspaper is not satisfied with the current union. Which henceforth would be the sovereignty of Member States must take higher priority, and lay emphasis on free trade. The price of a Brexit ', the loss of access to the common European market, according to The Times, however, too high to break with the EU.