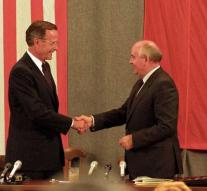 - Family man George Herbert Walker Bush will not mourn about it, but the 41st President of the United States, who died at the age of 94, will certainly be the man who did not finish the war against Saddam Hussein for younger Americans. That task was later reserved for his son, George W. Bush.

The Republican president, who swore to make his country 'a kinder and amiable nation' whose force as 'a power for the good' would be used, led his country into wars and finally closed the chapter of the Cold War. The 'old Bush' was a war hero with a long track record in many positions in which he served his country: from vice president to director of the CIA.