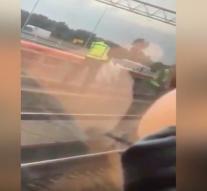 almere - Digital anger to a video of a train passenger who saw that railway staff possible neck turned back a dying swan. At least, since the fuss was about on Facebook.

On the social media is literally read the post with video: 'Can not be crazier by the NS. Instead of pick Swan neatly away, getting neck fold and also just another throw of the bridge. Top NS !!! '

Comments to the post vary from 'filthy animal torturer' to 'what a jerk of a guy bah bah 'and' message do at ProRail and animal !!!! Then he is really tackled !! '.

By Omroep Flevoland let the NS know that transferred slightly injured swans under normal circumstances the animal ambulance. The swan in the video would not be saved longer.