Home / Tech / The number of TV connections continues to decline 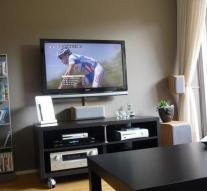 Most cable connections are made via the cable. It's about 57 percent. Television over the telephone line is significantly smaller by 19 percent. Fiber fiber is the third technique with 15.5 percent.

VodafoneZiggo remains the biggest party in the TV market with 60.2 pocent of the total market turnover of 455 million euros. That is a slightly smaller market share than last quarter. KPN was the second party with 27 percent of the market, a small increase in its market share.