Home / World / The number of deaths from Florence is increasing 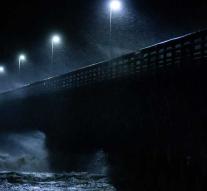 wilmington - The number of deaths from hurricane Florence in the states of North and South Carolina in the United States has risen to five. There may be more, local media reports. Florence has meanwhile been watered down to a tropical storm.

Weather services warn that the danger has not gone away. The most dangerous thing about Florence is the large amount of rain that falls. In addition, the storm moves slowly, causing it to rain hard for a long time in the same place. Many cities have to deal with severe flooding.

It is expected that the storm will remain suspended over North and South Carolina throughout the weekend and will only continue after that. As a result, the chance of even more flooding is very high, according to the local authorities.