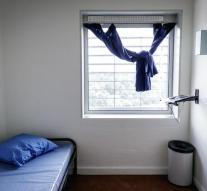 amsterdam - Retrieval requests from suspects to Belgium are temporarily arrested until further clarification about detention conditions in Belgian prisons.

That is what the International Court of Human Rights (IRC) of the Amsterdam Court in Tuesday delivered an interim judgment.

Reason was a request from Belgium to hand over eight people who reside in the Netherlands. The eight are suspected of being involved in a criminal organization that smuggles drugs from South America to Europe, including via the port of Antwerp.

The IRC says, among other things, based on a statement by the European Committee for the Prevention of Torture and Inhuman or Degrading Treatment or Punishment (CPT), part of the Council of Europe. This concerns concerns about the fundamental rights of detainees, especially in the case of strikes from prison staff in Belgium.