Home / World / The most expensive house in the world for sale 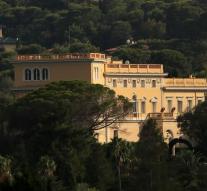 - The most expensive house in the world is for sale. EUR 1 billion is the former palace of the Belgian King Leopold II in the French Nice all yours.

Villa Les Cedres, a peninsula Saint-Jean Cap Ferrat in the South of France Nice is currently owned by the family Marnier, known as liqueur Grand Marnier. They want what 'smaller living' and the stulpje for that reason in the hands of a broker, the French newspaper Nice Matin reported.

For a billion get the new owner ten bedrooms, a concierge, a competition pool and a private botanical garden of 14 hectares which is 25 greenhouses with dozens of rare flowers and plants. Also, no less than thirty horses are stabled.

The current occupant Suzanne Marnier-Lapostolle tells the Daily Mail that there are currently fifteen gardeners are employed to maintain the garden. She hopes that it can continue to operate under the new owner.

The new owner will be neighbors of the composer Andrew Lloyd Webber and the US Microsoft founder Paul Allen.