Home / World / The most bizarre statements by Trump 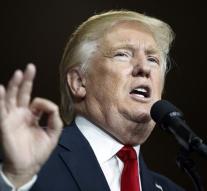 harrisburg - Donald Trump called his rival Hillary Clinton Tuesday 'the devil.' And he is killed under fire for comments about the parents of an Iraqi Muslim American soldier. It is certainly not the first time that Trump is in the news with its remarkable statements. An overview.

Over Republican Senator John McCain, who was imprisoned in the Vietnam War, Trump said: 'He is not a war hero. He is seen as a hero because he was captured. I like people who do not let capture. '

About abortion, a thorny issue in conservative America, Trump said in an interview with the channel MSNBC that if it is prohibited, some women will do so illegally. 'Then there must be a form of punishment. 'Later he came back and he suggested that the doctor had to be punished.


He also made sexist remarks about women, which he called 'fat pigs, dogs, sloddervossen and disgusting beasts' called.. When he was confronted with it by a journalist during a debate he called to ask her 'ridiculous'. Later, he said of the woman: 'You could see that blood came out of her eyes... blood came out of her... whatever, 'by which he was refer to the menstrual period. It came to be him furious reactions from women.


Trump took after the attack in San Bernardino out to Muslims and he called for a complete stop on the admission of Muslims to the United States. He claimed that many of his Muslim friends had agreed with his proposal to Muslims not to let more in.

The Mexican migrants had to pay for it. 'If Mexico send people to us, they are not sending the best people. Those people take drugs and crime along. They are rapists. Only some, I suppose, are good people. '

Besides Clinton also had another female adversary it quite a prize. 'Look at that face! Who would vote on that? Can you imagine the face of our new president? 'He said in an interview with Rolling Stone.

Despite all the violent reactions to statements like these, Trump seems his supporters to do little harm. He also said during a campaign stop in Iowa in January: 'I could stand in the middle of 5th Avenue and shoot someone. And that would cost me votes. '