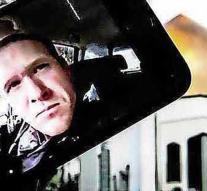 wellington - The prime suspect of the massacre in New Zealand wants to defend himself during his trial. He fired the lawyer he was assigned to.

Lawyer Richard Peters told AFP news agency that Brenton Tarrant (28) no longer wants to use his services. Peters also said the alleged mass murderer came across as 'rational'. The Australian is expected in court again on April 5. He has already been charged with murder, but there are probably more charges against him.