Home / World / The main points of the report leaked 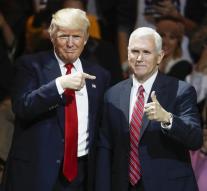 amsterdam - Both President Obama and his successor Trump are briefed by US intelligence on the report would be drawn up by a former MI6 employee commissioned by opponents of Trump. However, it is unclear how reliable writing. These are the main accusations:

This is even more the report published by BuzzFeed:

- The Russian regime has Trump certainly cultivated and supported five years. The goal, endorsed by Vladimir Putin, is to sow discord within the Western alliance.

- Trump in Moscow several times been offered lucrative deals to make him beholden to the Kremlin. Many of these deals were related to the World Cup, however, in Moscow in 2018. He did not respond to those deals, but is receptive to a stream of confidential and secret information from the Kremlin over his Democratic and other political rivals.

- A former Russian intelligence officer claims that the Russian secret service has collected sufficient incriminating information about Trump operations in Moscow to blackmail him. Trump has in the Presidential Suite of the Ritz Carlton hotel in Moscow, where the previously he hated President Obama and his wife Michelle stayed, hired some prostitutes to carry him a pee-show. The hotel is under the control of the Russian secret service FSB and there is extensive use of hidden cameras 'and microphones.

- According to another source would have occurred Trump activities at the Ritz Carlton in 2013. This is confirmed by a female staff member of the hotel. Another former high-ranking employee of a Russian intelligence service confirmed in June 2016 that the unorthodox behavior of recent years in Moscow Trump has delivered enough compromising material to blackmail Trump.\n  \n  \n   advertisement

- The Russian intelligence agencies have collected for many years compromising information about Hillary Clinton. That information consists mainly in Moscow bugged conversations and phone calls, but does not contain a very compromising revelations. The dossier Clinton is managed by the Kremlin spokesman Dmitry Peskov, which is directly under the command of Putin. The information has not been released abroad and Trump. It is still unknown what the plans of the Kremlin were with this material.

INSTRUCTIONS FOR COOPERATION BETWEEN THE TRUMP campaign team and KREMLIN

- The Trump campage team has permission from the highest authority in the Kremlin worked closely with the Kremlin. There are Russian diplomats were involved in the US.

- An employee of the Trump campaign admits that the Kremlin behind the leaks published by Wikileaks from the Democratic National Committee (DNC) is.

- The exchange of information between the Kremlin and Trumps campaign was werderzijds. Trump took advantage van'mollen 'within the DNC and hackers in the US and Russia.

- Information was sent using include 'pension payments' to Russian emigrants in the US as a cover. In addition, were employees of Russian consulates in New York, Washington and Miami deployed.

- A source close to Trump and his campaign manager Paul Manafort claims that Trump's campaign could live well with Russia as a villain and lightning, to divert the attention of even more corrupt business ties with China Trump. There would Trump considerable sums paid to local governments to buy, information that could be very damaging to his campaign.

- A campaign staff member has admitted Russian origin Trump that was worked intensively with the Kremlin. The Trump campaign which was co-directed by Paul Manafort, which in turn made use of foreign policy adviser Carter Page as an intermediary.

- The same source says that the Russian regime was behind the revelations of WikiLeaks on the Democratic National Committee. Wikileaks was used which involved 'aannemelijk'te can deny. In return Trump would not raise the Russian intervention in Oekeraïne in the campaign. To place the attention of Ukraine to divert Trump would also questioned the NATO obligations in the Baltic countries and Eastern Europe.

A SECRET MEETING OF TRUMP-ADVISER CARTER PAGE IN MOSCOW

- Sechin gave a future Russian-American cooperation in the field of energy and the lifting of sanctions against Russia raised. Page made no commitments.

- Page Dyvekin would have been alerted to the fact that the compromising material about Hillary Clinton was in control, but also such material Trump owns. According to a Kremlin staff has Dyvekin Page made it very clear that there Trump should consider in its contacts with the Kremlin it.