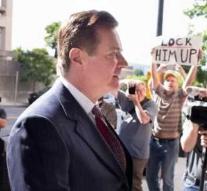 washington - A US federal judge refused on Friday to dismiss a charge for money laundering against former campaign leader Paul Manafort of President Donald Trump. The indictment was filed by special prosecutor Robert Mueller, who is investigating Russian interference in the US presidential election.

The ruling comes one day after a separate request from Manafort was rejected to disregard the evidence from a storage locker that was seized by the FBI.

In May, the same judge already refused a request from Paul Manafort to dismiss an indictment against him in the context of Russian influence on the election campaign. Manafort claimed that special prosecutor Robert Mueller had surrendered his book by accusing him of money laundering, among other things. Judge Amy Berman Jackson of the Columbia District then ruled that the Manafort claim contained 'numerous weak spots'.