Home / World / The heaviest woman in the world passed away 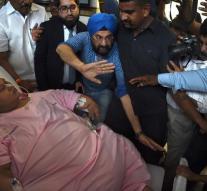 abu dhabi - The 37-year-old Eman Ahmed Abd El Aty, named the 'heaviest woman in the world', has died of the effects of her weight.

El Aty ever weighed 500 kilos, until she fled for operations to India and the United Arab Emirates earlier this year. There they lose a total of 300 kilograms.

Eventually, the Egyptian died in the Emirates. There, about twenty doctors have no response to heart disease and bad kidneys, the effects of her weight.

According to the hospital, a thyroid condition is the cause of her overweight, writes the Daily Mail, while her family speaks of a parasitic infection that swells arms and legs.

As a baby, El Aty was too heavy. When she was eleven, she could not walk anymore. As a result of obesity, many problems began to play, making them an ultimate compassion for help. That was answered by a doctor in Mumbai, who offered to treat her for free.

The hospital where she died says that she is praying for El Aty, and that he has sent condolences to the family.