Home / World / The handler Dutroux can get used to freedom 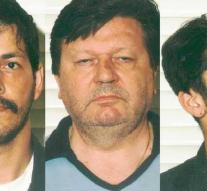 vilvoorde - Michel Lelièvre, the former henchman of child rapist and murderer Marc Dutroux, has recently become accustomed to freedom. He recently spent 36 hours outside the prison walls. This will happen more often in the coming period, with a number of limitations. His lawyer Benjamine Bovy has said that Thursday against the Belgian TV channel VTM.

The now 46-year-old Lelièvre was given 25 years in prison for the kidnapping of Dutroux victims. He has served him in a little over three years, reason to give him permission to prepare for a return to society.

The condition for his first trial leave was that he would not show up in the provinces of Limburg, both in Belgium and the Netherlands, and in Flemish Brabant. The German state of North Rhine-Westphalia and the municipality of Ans were also forbidden territory.

Michelle Martin, the ex-wife of Dutroux, has been conditionally free for five years. Dutroux was sentenced to life for multiple murders and rape. Attempts to arrange trial leave for him have so far failed.