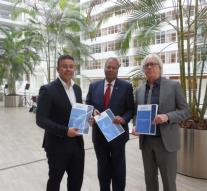 - The Hague must do as interesting city for criminal gangs' investigation of Roma children that are used here to beg, steal or to work in prostitution.

This enables the Hague youth ombudsman Bert van Alphen. A European approach and registration is required to save the children from the clutches of the gangs, but The Hague should also investigate how children can be properly identified and helped. 'Doing nothing is not an option in our opinion,' Van Alphen.

'This is a big and growing problem. These children are very difficult to identify and escape the assisting organizations even more as they do in the picture. 'When agents would already 'there happens nothing attitude' are relative to these children. Van Alphen would welcome the Hague as International City of Peace and Justice could play a coordinating role to tackle this problem. 'But that's not for me to say something about it. '


The ombudsman for children was actually busy moving with an investigation into the registration of children of CEE nationals when he was in talks with met among others youth guards and police on the problems concerning gypsy children in organized crime networks throughout Europe. The children are bought in the 'homelands' in Eastern Europe about 20 000 and report annually on 140. 000, so got to hear Van Alphen.

how many of these Roma children in The Hague, remains unclear. Police and rescuers they are 'occasionally' against. The big problem is that these children are invisible to the society and are professionally trained to remain under the radar. Sometimes the police arrested one of them, for example a shoplifter. But a child under twelve can not be prosecuted and should be sent away soon.

In The Hague, it is true that minors are 'transferred' to the youth care workers, who then try to determine the identity. 'But these children are not registered anywhere. This is also in their homeland, often Romania, not done, 'Van Alphen says. Moreover, such a child should be placed in a secure youth institution, otherwise 100 percent sure 'escaped'. And placing in such a setting is often not possible. With the result that children, if they are claimed by someone who calls himself their parent or guardian, yet again end up in their gang.