Home / World / The game of petanque runs out of hand 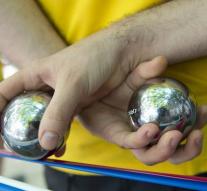 bordeaux - A game of petanque is completely discharged near the French Bordeaux. One player ran a knife stitch, another different fracture. Two men were detained.

The relevant pétanque players met on Saturday night with petanque and a barbeque. The game and the barbeque continued until late hours, to the nuisance of the neighbors. After the players got a story with the complaining neighbors, it ran out of hand according to Sud Quest.

The petanque players climbed on the meter-high fence and one threatened to throw his ball in. That's not what the neighbor did. The 39-year-old resident also climbed onto the fence and pushed the intruder pardoes off his fence. He flew four feet down and broke several bones.

The other occupant of the house then went outside with a knife and stabbed the other petanque player. This became light-wound. Also a third player would have had a blow.

The police arrested the two residents, but the investigation has not yet been completed. The relevant petanque players may be continued.