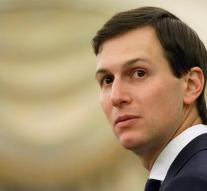 washington - The FBI has targeted its Jared Kushner, son-in-law and adviser to President Donald Trump, in investigating Russian interference in the presidential elections. That reported NBC News Thursday on the basis of closely involved in the investigation.

According to the researchers, Kushner has information that is important for the Russian research. The son-in-law is not per se self-suspect, say the officials.

It is unclear why the FBI is exactly interested in Kushner's activities, which last year included Russian ambassador Sergei Kislijak and Russian banker Sergei Gorkov.

The Washington Post reported last week that a White House advisor appeared in the investigation. It was not known who it was about.