Home / World / The dress of dresses is for sale 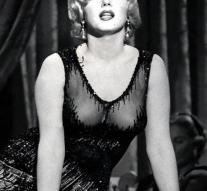 - A famous dress is scarcely imaginable than the one that Marilyn Monroe in the film Some Like it Hot (1959) contributed. Who wants to buy it, can compete in an auction to be held later this year. Auction house Julien's Auctions expects that the proceeds from the 'black-naked 'dress converted will be around 400,000 euros.

Julien's auction the Monroe Collection renowned collector David Gainsborough Roberts. The value of his collection is estimated at about 2.6 million. Besides several movie costumes possession Gainsborough include sharing her personal wardrobe and jewels of the actress.

The current owner was a lifelong avid collector. He also owns guns cowboy villain Billy the Kid and paintings by Winston Churchill and Adolf Hitler. He does his collection of hand because he is too old and has no children, he said.