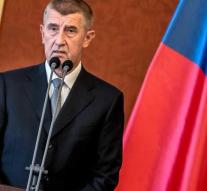 prague - The end of the political stalemate in the Czech Republic seems to be a step closer. Members of the Social Democratic Party voted in an internal referendum for the formation of a government with the ANO movement of Prime Minister Andrei Babis.

The Czech parliamentary elections took place eight months ago, but multi-billionaire Babis did not succeed in forming a stable government. His first minority government was shipwrecked in January when he received insufficient support during a vote of confidence in parliament.

Babis was allowed to make an attempt to form a government. President Milos Zeman sworn in earlier this month as prime minister. Babis wanted to form a government with the Social Democrats, but the fate of that coalition was in the hands of the members of that party.

The social-democratic leader Jan Hamáček announced on Friday that his fellow party members gave the green light for the coalition with ANO. However, the parties do not have a majority in parliament together. That is why we also need tolerance from the communist party.