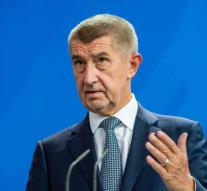 berlin - The Czech Prime Minister, Andrej Babis, in principle questions the claim of boat refugees for asylum and protection in the EU. 'If you ask me, these are economic migrants- all illegal. Young men who do not go to war for war ', says Babis in an interview with the German newspaper Bild.

On the objection that there are many violent conflicts in Africa, such as in Somalia and Eritrea, Babis responded with: 'I have been there to orientate myself. They pay 2000 to 5000 dollars for the trip. 'According to the Czech head of government, the smuggling mafia collects 5.7 billion dollars annually (4.9 billion euros). He did not tell how he got that information.

Babis states that he and the German Chancellor Angela Merkel differ categorically in view of the distribution of the migrants who make the crossing from Europe to Europe. 'I reject that. 'He sees more in' helping people where they were born 'and added:' Europe can not act differently in this matter than the US, Canada and Australia. We must defend our civilization, our culture. '