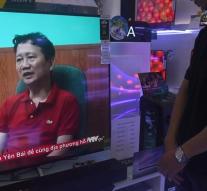 berlin - The Czech authorities have held a Vietnamese spy and delivered to Germany because of his involvement in the abduction of a Vietnamese businessman in Berlin.

That reports German prosecutors Thursday. The German government accused Vietnam of abduction of the former manager of a state-owned company seeking asylum in Germany. The incident reminded of disappearances during the Cold War in the former German capital.

The suspect is accused of illegal activities by a foreign intelligence service and accomplice to deprivation of liberty. He was arrested on August 12 and delivered to Germany on Wednesday. The investigation revealed that he had rented a delivery bus in Prague on July 20th, which was used in the abduction. He drove the bus to Berlin on the same day.