Home / World / The Catalan Parliament for the first time 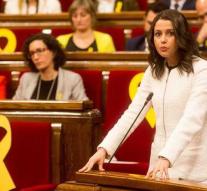 On Wednesday the parliament first elected a new chairman, the separatist Roger Torrent (ERC). He received 65 votes and his opponent of pro-Spanish Ciudadanos, José María Espejo-Saavedra, 56 votes. 127 of the 135 elected representatives were present at the session. Three separatist parliamentarians are stuck and five have gone abroad, including Puigdemont.

Madrid does not want Puigdemont to return as prime minister. The Spanish government would continue to rule the region if the Catalan parliament re-established Puigdemont. The current leader of the regional board is the Spanish deputy prime minister Soraya Sáenz de Santamaría, a party member of Prime Minister Mariano Rajoy.

The parliamentarians, according to the rules, have until 6 February to discuss the appointment of a new Catalan government leader and to appoint the candidate before 7 April.

Puigdemont is fugitive and is in Belgium. The leader of the ERC, Oriol Junqueras, is stuck in Spain. In their attempts to separate Catalonia on their own in October, they have committed a series of criminal offenses. Madrid seized October 27 and held elections in December, hoping for a loss from the separatists. But the balance of power in parliament has hardly changed.