Home / World / That way you make room for your thick SUV 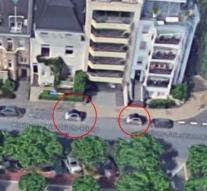 dusseldorf - A wealthy resident of a flat in Düsseldorf has found an original way to always get the parking garage with his thick SUV.

The millionaire has bought two Smarts that he parked on the street so that his car can always be sent in effortlessly.

'They are always here', says a local resident about the two cars. 'My rich neighbor grants himself this luxury'.

The two Smarts, which have been there for three years, are no more than an expensive roadblock that provides six meters of space.

The City of Düsseldorf says nothing to be able to do, because the two Smarts are legally there.

Meanwhile weeds are growing under the cars. They were moved once, probably for the APK inspection, according to the Rheinische Post.