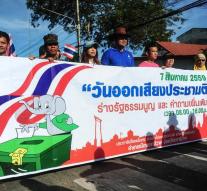 bangkok - Two eight-year-old girls in Thailand are arrested for 'obstructing the referendum process' and the 'destruction of public property' after they had drawn voting lists walls.

The reason: they found the pink color of the forms as beautiful, police reported Sunday.

The lists were hanging near a school and were meant for the referendum which will be held August 7 for constitutional reform. According to police, the child 'vandals' the act known. But because they are so young they will not be prosecuted, let out a police commander.