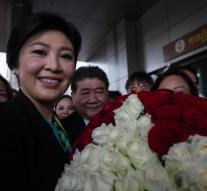 bangkok - Former Prime Minister of Thailand Yingluck Shinawatra Friday appeared in court on the first day of the trial against her for corruption around a subsidy program for rice farmers. They accused that they did not address the corruption around the popular subsidy which was founded by her brother and also former Prime Minister Thaksin Shinawatra.

,, I will do my best to prove that I'm innocent ', 'Yingluck said at the start of the session. hundreds of supporters of Yingluck had gathered near the building of the court to support her.

Yingluck became the first female prime minister of Thailand in 2011. She was put out of her job by a court in the spring of 2014, a few days before the military took power in the country.