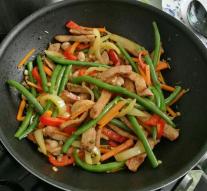 karlsruhe - Presumably, a Thai thanks to his culinary skills that he has saved a stay in a German prison. The police in Karlsruhe announced Tuesday that the 43-year-old man had to pay a fine of 3800 euros or hundreds of days in the cell.

Because the man apparently could not bring the money, the Thai was arrested. In 'Visible Deprivation' he called a restaurant in Karlsruhe and asked for help. 'The employer probably had no choice, otherwise he would have to find a new cook, and paid the fine for his employee,' said the police. 'Apparently, the 43-year-old's cooking was very convincing. '