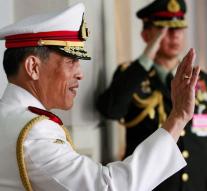 He has asked to postpone the inauguration to mourn with the Thai people. 'When the time is right, the crown prince will fulfill his duty as heir to the throne. He confirmed, 'said Prayuth.