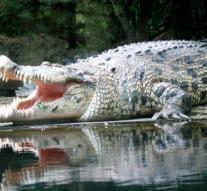 bangkok - The Thai government has tightened security rules for keeping crocodiles. The measure follows the escape of 28 crocodiles from a crocodile farm. All escaped animals were captured or slain .

The walls of the boxes where the crocodiles are kept, must now be at least 1.50 meters tall and are covered with metal grills.

Previously, the only prescription that crocodiles baking 'strong and solid' needed to be. Thailand has one of the largest crocodiles industries of the world.

There are over a thousand farms with a total of 700.000 animals. The meat, skin and blood are commercially traded. Often farmers also keep pigs crocodiles as lucrative sideline.