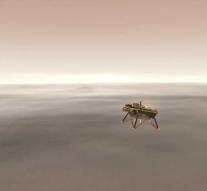 houston - With a dull thud, a long crossing will end on Monday. After flying 484 million kilometers, an American laboratory lands on Mars. The InSight must, as the first explorer ever, go digging meters deep into the ground of the planet. This allows scientists to learn what is under the surface.

The InSight was launched on May 5 from California. On Monday, the device enters the atmosphere of Mars at a rate of nearly 20,000 kilometers per hour. Then he has less than seven minutes to slow down. The flight control on earth looks powerless, intervention is impossible. If something went wrong during the preparation, the mission failed before it can begin. If everything goes well, the InSight will plunge on the surface with a snail's pace of 8 kilometers per hour. The InSight's redeeming sign of life comes to earth eight minutes after landing.