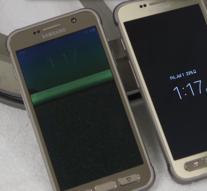 amsterdam - The claim that the Samsung Galaxy S7 Active waterproofing, proved incorrect after a test of thirty minutes in a bowl of water.

The American non-profit magazine Consumer Reports tested two phones from Samsung. The Samsung Galaxy S7 Active, the standard S7 and S7 Edge. Upon removal from the container of water had active green stripes across the screen, bubbles in the lens of the camera and water drops on the SIM card. After a few days of drying were the scenes are not legible.

The standard S7 and S7 Edge survived the test well. According to the specifications would be the Active designed to survive a period of 30 minutes in the water. Samsung thereby in an advertisement showing a runner with the Edge in her hands in the pouring rain. The phone would survive a fall into a fishbowl.


Samsung admits to having had some complaints. For the phones is therefore a warranty. The brand is investigating the situation.