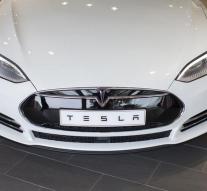 - Music streaming service Spotify has secured a permanent place in the electric cars from Tesla. The companies previously teamed. Drivers are therefore Tesla while driving access to the inexhaustible source of music Spotify on more than 30 million songs.


A recent software update is the premium offering from Spotify directly integrated into the entertainment system of Tesla. Tesla drivers do not pay extra for the update, it was announced Monday.
Tesla currently has almost 100 000 vehicles on the road of the Model S Sedan. In addition, recently launched its new Model X. The Swedish Spotify is a leader in streaming services and has more than 75 million users, of which 20 million paying users.
Other automakers were also previously partnered with Spotify, but it was, according to Sweden not on the same scale as now is the case with Tesla. In the US, Spotify via Tesla not yet available.
NEW