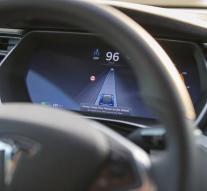 - Tesla will limit the capabilities of its newly introduced autopilot software. This was reported by Tesla boss Elon Musk Tuesday.

Last month, Tesla launched the software that American owners of a Model S could put their car on autopilot. The company stressed that it was a beta version, but that did not stop some drivers fail to look at the limits of possibility. The software then also came under question after it appeared on the Internet videos of drivers who were near misses.

" We're going to make some limitations to minimize the possibility that people do crazy things with it ", says Musk during a press presentation of the quarterly figures of Tesla. The automaker is also working to get the green light in Europe to be able to launch the software, but Safe Traffic Netherlands responded recently skeptical of that. " Something you should permit only when the one hundred percent safe ", reported the organization to De Telegraaf.