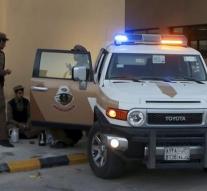 jeddah - Two suspected terrorists have blown up themselves when they were surrounded by Saudi security forces in a house in Jeddah. The explosions a shoot preceded, reported Saudi media Saturday.

Terror group Islamic State committed several attacks since mid-2014 in Saudi Arabia. Most were directed against members of the security forces and the Shi'ite minority.