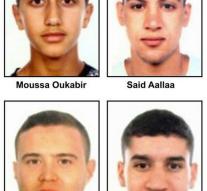 barcelona - The terrorists who entered the Catalan city of Cambrils with a car on people have been in Paris in recent weeks. The French Interior Minister Gerard Collomb told the BFMTV transmitter that the group was riding in an Audi that was flashed at Paris.

He said that information was passed on to the Spanish authorities. The governor said the terrorists were in Paris to work. Collomb revealed that the French intelligence services had no information about the group. He spoke of a terrorist cell that was 'exclusively Spanish'.