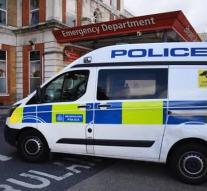 london - The British police arrested four men on Wednesday that are suspected of preparing terrorist acts. Agents arrested the suspects in homes in east London.

The police declared in a statement that the men aged 18, 24, 25 and 27 were arrested after investigations by the MI5 internal security department and the police. The suspects are still being heard.

The British capital was still frightened earlier this year by an assassination of five deadly victims. A man drove a car in March on pedestrians on the Westminster Bridge. Then he dropped an agent outside the parliament building. Then the police shot the assailant.