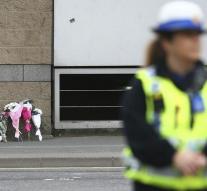 london - The suicide terrorist who killed 22 people on Monday night shortly after a performance of Ariana Grande in the British city of Manchester had recently returned from Libya.

That said the British Interior Minister Amber Rudd told the BBC on Wednesday.

Asked if Salman Abedi had returned from that country recently, said Rudd: 'Yes, that's confirmed. When this operation is over, we will look at its background and what has happened, how he has been radicalized and what assistance he has received. ''