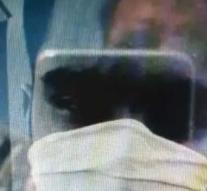 new delhi - An Indian man (21) thought he was funny when he boarded the plane with some friends. 'Terrorist on board. I destroy women's hearts, 'he posted on social media.

He shared that message via his phone while covering his face with a handkerchief. But cabin crew could not laugh at it, reports Times of India. The man was expelled from the plane without mercy. His luggage was also checked, but there was nothing suspicious about it.

The twenties emphasized against security services that it was a joke. Yet he was handed over to the local police. The plane was delayed more than an hour.