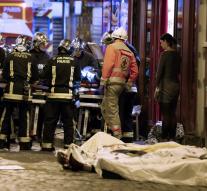 - According to France Info and BFMTV is a terrorist who was involved in the attacks identified in Paris. It involves a young Frenchman who was known to the intelligence services because of his radicalization. "

The identification was made ​​through DNA testing and fingerprinting.

According to the British tabloid The Sun is about a 15- year-old boy who was involved in the attack at the Stade de France football stadium where the friendly exhibition game between France and Germany took place Friday night.